You Are Here: Home → Kiribati Ferry Search Expands After 7 Are Found Alive

Commodore Webb did not know the medical conditions of the seven, except that they were “pretty dehydrated” when they were found. 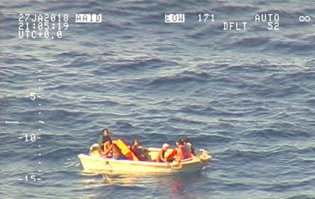 An image from a military video showed survivors aboard the dinghy that was found Saturday adrift at sea.

He said the survivors had told rescuers that the ferry split in two and sank, and that they were able to use the dinghy because it detached from the larger vessel. Earlier in the trip, the ferry, the MV Butiraoi, had hit an atoll, forcing it to undergo repairs to its propeller shaft.

Despite information from the survivors about where the ferry sank, Commodore Webb said…