You Are Here: Home → Church of England ‘Colluded’ With Bishop to Hide Sex Abuse, Report Says

Mr. Ball refused to meet officials conducting the review or to submit a written statement.

The report said that despite the efforts of victims and witnesses to report the abuse, the church allowed its desire to preserve its reputation to supersede the imperative to help victims.

After the report’s publication, Archbishop Welby asked Lord Carey to resign from his position with the Diocese of Oxford.

Lord Carey said Thursday that the report made for “uncomfortable reading” and he apologized to Mr. Ball’s victims. “I believed Peter Ball’s protestations and gave too little credence to the vulnerable young men and boys behind those allegations.” 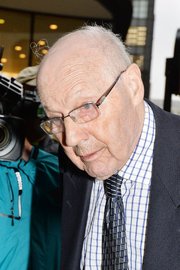 Peter Ball, the former bishop of Lewes and Gloucester,…