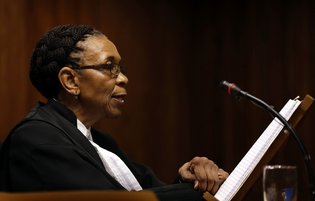 Judge Thokozile Matilda Masipa at the High Court in Pretoria on Friday. Last month, she gave Mr. Pistorius a six-year term, far shorter than the 15-year minimum sought by prosecutors.

A judge in South Africa refused on Friday to grant prosecutors permission to appeal the six-year prison sentence she gave the double-amputee sprinter Oscar Pistorius, saying an appeal would not have a reasonable chance of success.

Mr. Pistorius, who is serving the prison sentence for the murder of his girlfriend, Reeva Steenkamp, in 2013, did not appear in court.